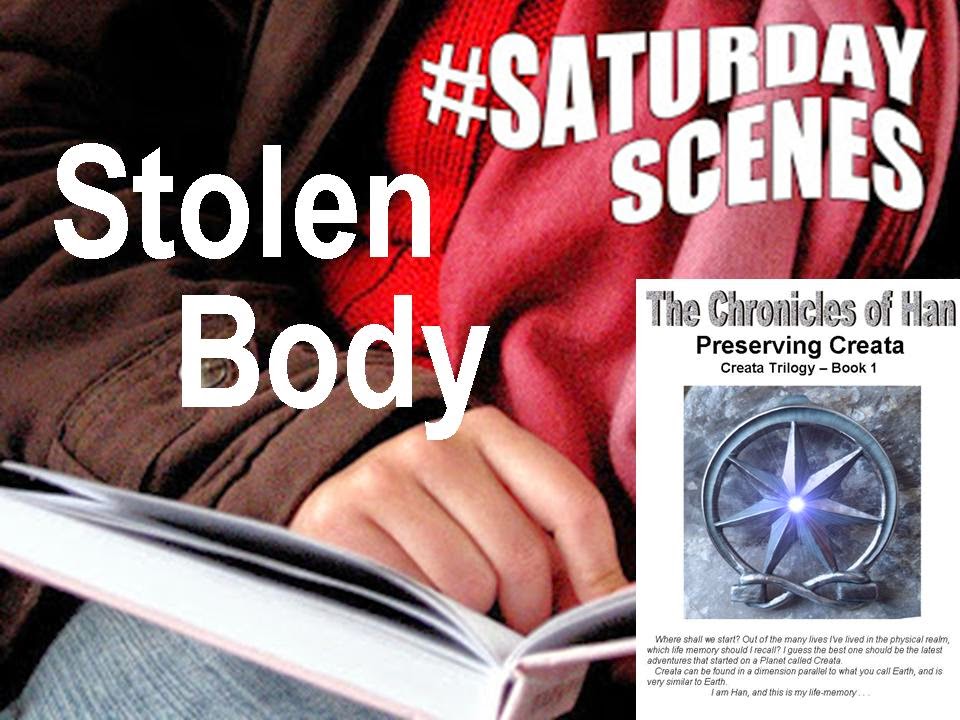 (Excerpt from The Chronicles of Han Storm, Preserving Creata)

So, how does it feel when your body is stolen?

Panam interrupted the homecoming. “Have you had anything to eat since you woke up this morning?”
Racewater looked at me too.
“No.”
I was not impressed with the quarters. It was cramped and I would not be able to stay here for long.
“Are you feeling like anything to eat right now?” Panam was concerned.
“No, thank you.”
I changed the subject and voiced my complaint. “I am really not comfortable with this room.”
Racewater agreed. “Neither are we, but this is the best we have at the moment. As I said, if you can find something better, please do.”
I had to be satisfied with that and sat down on my bed. Sleep was very far away. I had just woken up from a three day snooze. Why should I be feeling tired?
Panam was digging in a bag. I had nothing better to do but watch him. He brought forth an energy bar, covered in chocolate. It was the berry type I favoured. I knew it was for me and my mouth suddenly watered for it.
This was the first time since acquiring this new body that it responded in this way at the sight of something edible.
I was as surprised as everyone else by the barbaric manner in which I saw my body grab the bar from Panam and gobble it up. It just made sure the wrapper was opened wide enough to get the snack out.
I was so embarrassed by this sudden inexplicable lack of control that I kicked off my shoes and buried myself under the blankets on my bed.
I really did not want to face my friends. This was absolutely humiliating.
I heard Panam sit down on the opposite bed, facing me. “Maybe we approached the situation all wrong with the nutritional requirements of your new body? Maybe it needs more fruit sugars? I want you to look at me.”
I refused to do so physically. I was well aware that I was looking at him with a part of my consciousness outside myself.
Panam looked over at Racewater, a silent question in his eyes. He had another bar in his hand, already unwrapped.
My body could not help itself and, without looking and with lightning speed, left Panam with empty hands, the wrapper falling to the floor. It gobbled that one up under the blanket.
Again, surprise registered on both their faces. I wished to die of embarrassment, but did not get so far.
Warm comfort enveloped me. There was no way the energy bars could be drugged, but that was the response it had on my body. It fell asleep.
This was so weird. Half of me was asleep, the other half felt that I needed to return to my body too, to give it the rest it needed. Like a naughty child I defied the call of the mother, trying to stay awake when I was already asleep.
Panam checked my vitals, sitting down when he had finished.
“I really do not know just what had happened now, but he is sleeping like a small child“ he told Racewater. “I will ask Sandra to test the response of the energy bars on his bloods. There must be something in there that he responds to as a natural knock-out.”
“In the way he grabbed the bars, it was if he had absolutely no control over his body“ Racewater replied. “Did you see the surprise and hurt in his eyes? I hope he can forgive himself come morning. Maybe we must simply ignore the whole incident and act as if it never happened?”
“We could, but it is not going to help us find out why he responded in this way. He always showed great control over himself. I am scared he might be falling apart.” Panam was frightened.
He had good reason to be. He had seen first hand what can happen when psychics ‘lost’ it. It was not a pretty sight.
I resolved to get a grip on this body. I was its master. It had to listen to me. Starting right now, I refused to give up this part of my consciousness to join the sleeping part of myself. This was the first step to independence.
Locked out of my body, I had nothing else to do but eavesdrop on Panam and Racewater. It was boring entertainment, with both preparing for sleep after a hard day’s work. Panam confirmed that Racewater had dinner. Racewater took a shower and turned in.
Panam checked my vitals before taking his turn to shower. He made himself some coffee before retiring to bed. I was left alone with only the bathroom light on for company.
Both men were sleeping almost as soon as their heads hit their pillows. I had a closer look at my silent, sleeping body. It looked small and vulnerable on the bed. Even the features took on the look of a very young child.
I stayed in front of my body the whole night. It stirred from time to time, and at one stage said something in a language I did not recognize.
I asked for a download. A feeling of saturation brought the necessary knowledge. My body had clearly said “I’m coming mother.”

For more information and excerpts visit www.chroniclesofhan.com
Posted by Chronicles of Han at 17:53 No comments: 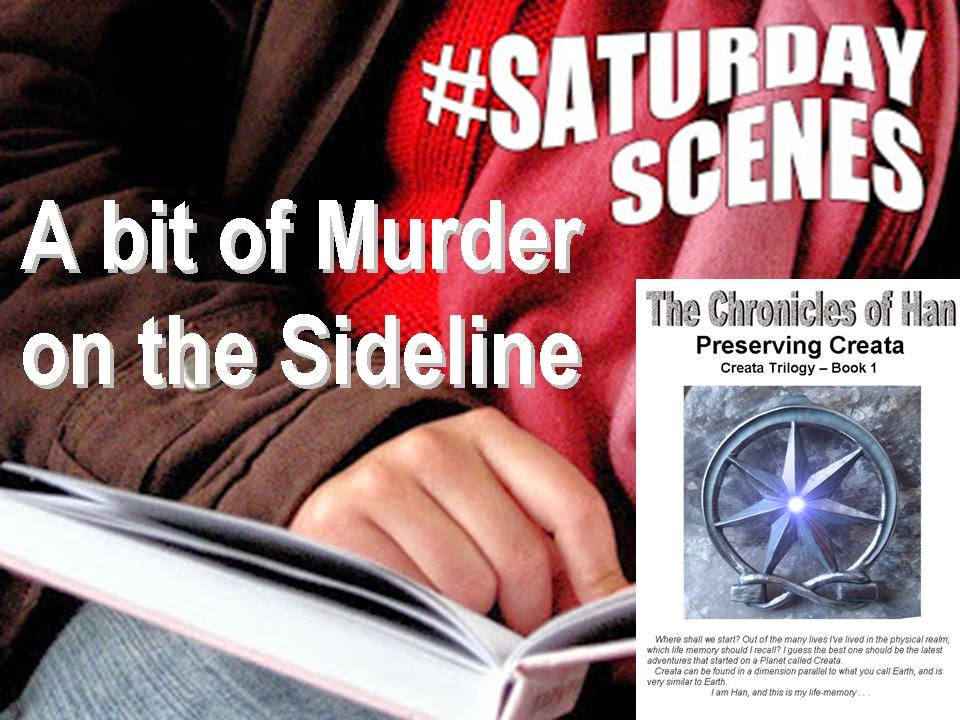 Excerpt from The Chronicles of Han Storm, Preserving Creata

A bit of murder on the sideline

"
Psychic weapons!
Small wonder the Government wanted to control all of us.
I lay thinking about the man who had killed Tucker. I had followed his life-memory before. I could find him if I concentrated.
Relaxing, I slipped my spirit out of my body onto the plane of active entities. This place presented itself to me as a dark background with tiny pinpricks of light moving around within it. Every light represented a living entity with a distinct aura around each one.
This was how I found 'missing' people. By concentrating and matching their vibrations to their auras, I could pick them out of the crowd.
I orientated myself by concentrating again on the aura I had seen within the recordings. I knew the area where I should start seeking and the intuitive response to the 'feel' of the energy always helped me.
I soon came across the group of entities I was looking for, the group where I would find Regent, my enemy.
Found him!
I forcefully bumped my enemy out of his body. He knew immediately who I was and what was happening.
Untrained and with no natural psychic abilities, it was like taking sweets from a baby.
I excused my stolen body from the card-game and went to a public comm in the passage.
While dialling Morgan's private line, I ignored my enemy's silent screams.
"Yes!" Morgan shouted.
I did not waste time. Speaking with my enemy's voice, I gave Morgan the ultimatum.
"I have him with me. I'll bring him to your yacht. One hour. Be there" I told Morgan, hanging up before he could say anything.
Fear welled up in my enemy's body.
**Keys?** I requested.
**Right pocket** came the involuntary response.
I went outside, ignoring questioning glances from colleagues. They knew better than to ask uninvited questions.
**Vehicle?**
**Yellow Mont-Marie.**
This was probably too easy.
I squashed any doubt.
I found the topless sports-vehicle. It turned out to be a real joy to drive. A feeling of pride from the owner came through telepathically. It was followed with a feeling of regret.
We made good time to the pier where the yachts were moored. We arrived early and I invaded my enemy's memories to confirm that his boss' vehicle was not there.
Driving past the parking bays, I hid the little yellow vehicle behind some containers at the water's edge.
Checking the firearm in the shoulder-holster, I thought it would do perfectly for my purposes. Using my enemy's memory, I found the right yacht.
I expanded my senses to check that no-one was on board before hiding in the cabin.
I did not have long to wait as Morgan walked into the cabin a few minutes later. He did not have his usual body-guard with him.
It was a foolish thing to do. He had a habit of coming alone onto his yacht, which I was counting on.
He was totally surprised to see Regent here. Surprise turned to fear when I lifted the fire-arm.
It kicked into my palm, but the hand holding it was strong and the body well trained. The sound was deafening in the small area.
Morgan dropped to his knees, a red patch forming over his heart.
I was trained as an accurate shot in the Academy. My enemy never missed a target. We made a lethal combination.
Once more the trigger was pulled.
A second explosion and a second patch of blood on Morgan's chest.
His body-guard should be on his way already.
A third explosion and Mr Custos Morgan's body perished.
I left the body of my enemy. He was done for anyway . . .                                 "

Posted by Chronicles of Han at 01:10 No comments: