Upon a dragon's love, other dimensions, elves, hunting and metaphysical upgrades 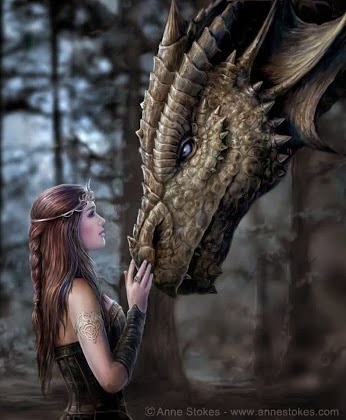 Upon a dragon's love, other dimensions, elves, hunting and metaphysical upgrades

"  Moira was waiting for me at the exit from the Faery Dimension. I was surprised to find her there, even more so because she was saddled with a double saddle.
She huffed lovingly at me, touching my shoulder with her soft muzzle, making me want to kiss her on her velvet nose.
Before the thought could become an action she put her head in front of my chest, shoving me firmly into the oak tree from which I had just appeared.
For a moment I feared that I would tumble back into the Faery realm but my shoulders hit the solid surface, the back of my head smacking hard against the trunk.
*Jays, Moira! Stop it!* I shouted at my Huracan. *What is wrong with you?*
She seemed excited and at the same time agitated.
**You respond** she told me, poking me again with her nose on my shoulder, as if to assure herself that I was truly standing before her.
*Why would I not respond to you? We are inseparable* I replied, trying to dodge away from the tree, just to end up being pinned to it again.
**I lost you!** she wined for a second, pushing so hard into me that I could no longer breathe.
"Let go!" I wheezed at her. "I'm here! I'm back!"
She relaxed her hold a bit and I could breathe again, convinced my bow would leave its imprint in purple bruises on my back in a few minutes.
She found this thought humorous, backing up a bit more. **I'll heal you. Just NEVER, EVER leave again without telling me!**
*Oh!* I thought at her. So that was why she was so upset. *I will inform you next time I want to leave.*
**I do not want to be without you, Han** she told me. **You are part of me. I do not like it when we are not together.**
I sighed. Sometimes it was better to be alone for a while, but she did not like it when we were separated and I got that message, loud and clear, having the bruises to prove it!
Continue reading

Posted by Chronicles of Han at 10:41 No comments:

Path of the Writer

Path of the Writer

Within the Oneness, I am to walk the path of the writer. Which is the path of inward discovery and outward loneliness.
Only the writer knows how he truly feels and what he truly experiences on the path of producing the outcome within the pages of a book. A book to be read and re-read by the people that need and enjoy that which the writer had created.
Creating. As sure as creating a body for a child. This is a tool for the soul, to enlighten, to soothe, to bring understanding, to grow. We all read. Every time we stop reading, we have learned so much more. We have, in some small way, changed, grown, grieved, cried, laughed with the author, the character, ourselves.
We have healed a part of our being, we have learned to understand some part which we needed to understand.

Posted by Chronicles of Han at 09:57 No comments:


Short Story (exclusive excerpt) from The Chronicles of Han Storm

If you are going to live for 400 years, your friends and family passes on into different dimensions. But sometimes, they wish to re-join you and you get to continue your adventures with their Soul-Spirits reincarnated in new bodies . . .

} I faltered.
The young recruit in front of me had your typical Gancor disposition. Dark brown skin, black hair, well-built body.
He even had the Racewater features stamped across his handsome face.
But what made me gasp is the fact that before me, within this . . . boy, I recognise my brother, my friend, my handler from so many years ago.


Daniel Racewater, re-incarnated within this new, vibrant body.
The young man stuck out his hand, waiting to be greeted.
Within my distress to see Racewater in front of me, yet also not Racewater any longer, I’ve completely missed the name they call him now.
“I did not catch your name?” I asked, greeting the young man with a firm glove-covered hand.
“It is Ignesious Racewater. You can call me Racewater. Everyone does.”
Even his voice was very similar to Daniel’s.
“May I ask? Are you family of Captain Daniel Racewater?” I turned away from him, seating myself on the comfortable couch.
“Yes. I’m his nephew. It is a pity that I never had the honour of knowing him. He passed over before I was born.”

Most Asked Question Regarding The Chronicles of Han Storm Books 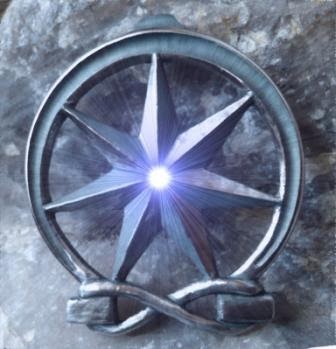 Probably the most asked question regarding Han Storm: Chronicles of Han Storm:

What is the significance and meaning of the Seven Pointed Star Symbol / Emblem used in The Chronicles of Han Storm?

The Chronicles of Han Storm symbol / emblem is the conglomeration of the Cosmic Signs for Creation (or the symbol of perfection) and is considered the Original Cosmic Portal Sign.
Description: A seven pointed star enclosed in the Omega sign (upside down 'u' or horse-shoe), the bottom arms ensnared and grounded by the infinity sign.
The Omega sign represents all energetic portals leading to infinite vibrational energetic destinations, hence the infinity sign incorporating All of Creation.
The seven pointed star represents all the elements of the Universe. Being a Great or Acute Heptagram, represents the highest concentration of energy at accumulation point in the middle of the emblem.
The Seven pointed star also refers to the Realms of Elfes, Faery and Magick.
Ω

Email received from the Chronicles of Han Book Club Members.

Chronicles of Han Storm Meeting - 21 December 2013,
What a wonderful day spent in the presence of H Gibson, Author of The Chronicles of Han Storm. This was a truly amazing event and the Solstice made it even more so.
After the author had answered all our questions regarding the books and the information contained within, we have unanimously come to the following consensus:
The Chronicles of Han Storm are speculatively real and, although listed as Adventure Science Fiction Fantasy, seen as Philosophical, Theological, and Self Help Guides by most Book Club Members.
The Chronicles of Han Storm have helped many a person to find their path in this life, to make peace with the past, to embrace the future as well as the end of their lives.
It had given those who were passing over peace of mind that a part of them is eternal and lives on forever.
Truly an amazing series set in an entertaining, intriguing and exciting story format.
We can only thank the author for her dedication in bringing these wonderfully educational and enlightening books to the world.
We wish her and her family an amazing 2014 (and hope that the next book will be available soon.)

Han Storm Book Club Reading List on Goodreads
Posted by Chronicles of Han at 06:06 No comments:

The Han Storm Files: Start of a lifetime adventure 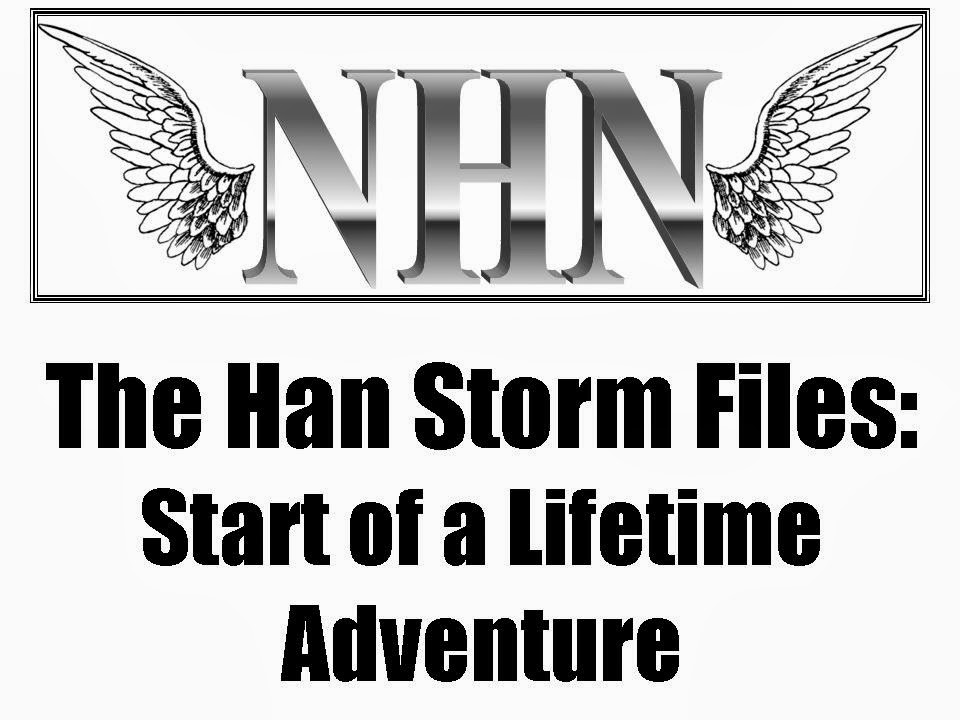 The Han Storm Files: Start of a lifetime adventure

(Location: Duback, Base Zero) We are finding ourselves at Base Zero. This is what the facility outside of Stelārşea is known as. This had been Han Storm's official home base for as long as he had served the CMC.
We have requested, and surprisingly been granted, accommodation here, finding only a few members of staff to keep the facility in working order and impeccable neatness.
We three reporters have decided to work together as this would be the best to sift through such volumes of information.
VidNews Interplanetary is sending us state of the art scanning equipment that will digitise the documents immediately into working format. We have also found recorded footage, but as our modern technology is no longer able to decipher the ancient recordings, we have spread the word that we need the assistance of everyone that could help in finding the old equipment that could play the recordings.
In this regard, Professor McTee has agreed to request the museums to see if any such equipment is still in working order. Rogge is an expert in VidNews equipment and will handle the transcriptions and, if possible, place the recordings onto the modern quantum players.
Paggan has been trained in most of Creata's Ancient languages and would be able to translate the different documents as needed.
Maybe, with a bit of public pressure, we could gain some extra assistance in helping hands?
Investigative Reporter R. Hawks, News.