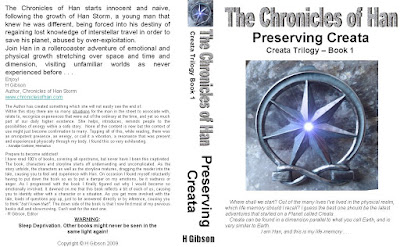 777 A5 pages of non-stop action and sleep deprivation!

Creata has reached her maximum limit of 9 billion people.

Fully aware that they are on the brink of total ecological collapse, the Global Government employs an unwilling pioneer to move them off their planet . . .

The Chronicles of Han Storm, Creata Trilogy, begins innocent and naive, just like Han Storm, as he sets out on his journey of discovering and enhancing the metaphysical side of his being that is awakened by his career as a young Police Officer. Using and growing his talents to solve crimes at first, he later is made to realise that his planet is in serious trouble due to over-exploitation and he is the only one that can do something about it. Using his developing skills, he regains lost inter-stellar, worm-hole and Portal knowledge in order to assist the migration of his people to other planets.

"Where shall we start? Out of the many lives I’ve lived in the physical realm, which life memory should I recall? I guess the best one should be the latest adventures that started on a Planet called Creata. Creata can be found in a dimension parallel to what you call Earth, and is very similar to Earth. I am Han, and this is my life-memory . . ." - Han Storm 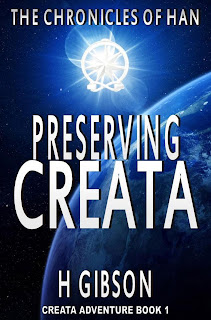 Note from Author: Although placed under 'normal' book genres, these are "Real Life Past Life Channelled Autobiographies". Some readers have been found to refer to the books as esoteric/spiritual manuals, where others enjoy them as the Adventurous Narratives that they are. Originally named 'Journeys of a Psychic', for marketing reasons the books were renamed to 'Chronicles of Han'. Reader ages: Younger Adults 18+ right through to Pensioners. 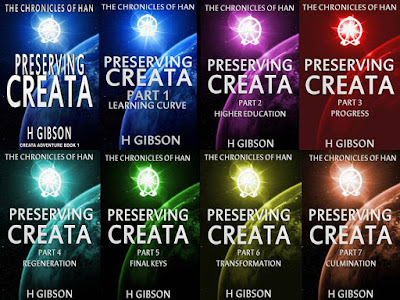